At the invitation of the Presidential Chancery, Lauris Reiniks visited the Rīga Castle on July 7 for an event at which President Vaira Vīķe-Freiberga was honoured on the last day of her presidency. Lauris presented a special gift to the guest of honour – a new song called “Good Bye, Madam President.” (Uz redzēšanos, Prezidente!) He performed the song together with musicians who took part in its preparation – lyricist Mārtiņš Freimanis, producer Midis, and back vocalists Vineta Elksne and Karīna Tropa. Lauris presented the president with a copy of his latest album, “Nakts Veikalā”, which contains the song. He said that musicians have always been the president’s fans. “We simply love you, and thank you very much,” said Reiniks.

The president responded by saying that she has always loved Latvian artists, and after the touching song, she said that it is always hard to say good-bye, but that’s life – things change, things move forward. The president wished Lauris success and accomplishments in his career.

President Vīķe-Freiberga also received two national orders, and her portrait, produced by the distinguished artist Miervaldis Polis, was unveiled. It will hang along the portraits of Latvia’s five previous presidents in the Hall of Orders of the Riga Castle. The new President of Latvia is Mr.Valdis Zatlers. 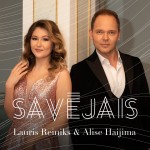